The Battle of the Atlantic took place from about 1940-1945, during the entire World War II. Early in the war, Britain, France, and Germany had divided control of the Atlantic. Britain and France mainly used the Atlantic for shipping and importing of American goods (weaponry, and war supplies); and after war was declared between Germany, Britain, and France, the Germans used the Atlantic to destruct British and French supplies and ships. After America entered the war much of the German naval force was concentrated toward U.S. beaches. Gradually, the allied powers gained control over Germany, and the allied success in this battle enabled for other critical maneuvers such as D-Day. As the war ended, attacks in the Atlantic and the general Battle in the Atlantic also ended. The Allied control of the Atlantic also led to the Allied ultimate win in World War II.

*A video showing the general German U-boat attacking ships during the Battle of the Atlantic.
KEY EVENTS:

1940- Germany obtains France. Germany now has complete access to the Atlantic through the English Channel. Germany also now only has one enemy in the Atlantic—Britain. Because Germany now has more control of the sea, they were determined and convinced that they’d win the war.

1940-1941- “Happy Time” – Germany is in control of the sea sinking merchant and war ships left and right. They had help from their Italian allies with submarine numbers and extra surface ships. This was the highest point in the Battle of the Atlantic for Germany, just like it was for them during the war. 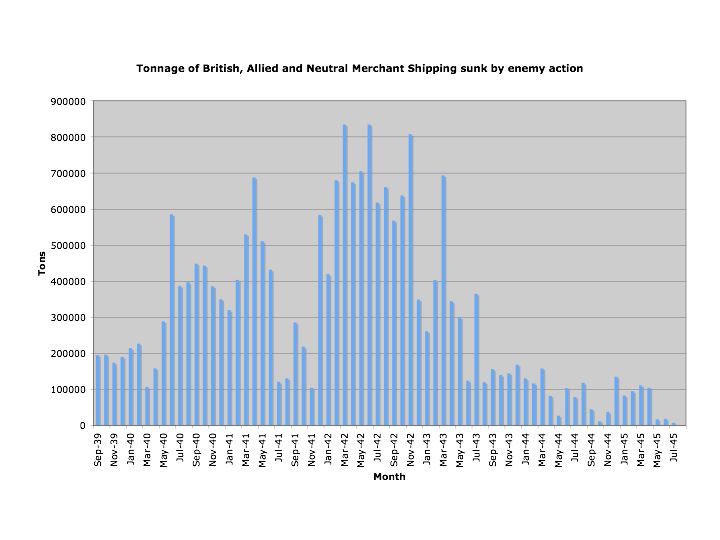 *This graph shows the increased numbers of British ships sunk from January of 1942 to July of 1943, during Germany's "Happy Time."


1941- The United States declares war on Germany – As America enters the war German forces focused all U-boat activity on the U.S. coastline, destroying hundreds of American naval properties. America soon changes its shipping system to a convoy escort system with British support that creates a widened battlefield.
1943- Allies take the lead – German U-boat activity was restricted in the winter of 42-43 during which time the Allies became offensive and pulled ahead of Germany in the battle. This was a turning point in the war as Allies had control of the seas, which later enabled the transportation of goods and the well-known D-Day landing.
NEW TECHNOLOGIES:

-Hedgehog: anti-submarine mortar: detected target and kept track of it, and only exploded if it hit a U-boat. This was used and invented by the British and the Allies.

-Leigh Light: searched light and airborne radar that helped the British track down and attack the Germans.

-Metox receiver: first developed by a Frenchman, and used in German U-boats to enable them to avoid sudden ambushes. However, it did not pick up Canadian and U.S. submarine radar, only convoys when the sets were in use.
-ASDIC (sonar radar): breakthroughs mainly made by British, but sonar used by every country that was apart of the Atlantic Battle. Sonar was used to detect oncoming submarines and to prepare to attack them. This is the most important technology and made the Battle of the Atlantic stand out in World War II because of its first and extreme uses.

-Submarines and aircrafts were the main technology used in the battle. However, even though they're not new technologies, new adjustments to them were made like the additions of adding radar detectors, Leigh Lights, and the other new technologies above.

Otto Kretschmer- (1912-1998) A German U-boat Commander with the highest level of allied destruction, who was known for his tactic of attacking under darkness. Earned the nickname "Silent otto" for both silent running U-boat tactics and reluctance to make radio broadcasts during patrols.

Karl Doenitz– (1891-1980) A German naval commander responsible for the strategic "wolfpack" formation that lead to much of the U-boat success in naval combat. He set up armies of submarines to attack defending warships and merchant ships, and was the cause of much British and American naval destruction. Following the suicidal death of Hitler, Doenitz was designated successor as head of state and remained in power for twenty days.